Home › Blog › Help! I've Been Stung By A Wasp In Chicago

Help! I've Been Stung By A Wasp In Chicago

Everyone loves running through the sprinklers on a scorching hot day, but if you have a wasp infestation on your Chicago property, spending time in your yard could be dangerous. Wasps are aggressive summertime pests with bad attitudes and venomous stingers, and a large enough infestation is hazardous to your health. These grumpy pollinators are always ready to pick a fight, so you need to know how to care for a wasp sting if you ever have to deal with one. 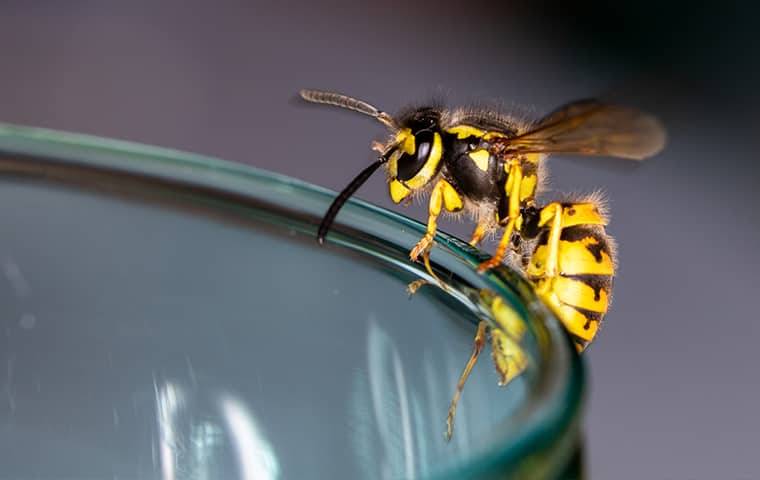 There are over 30,000 different types of wasps globally, but luckily, most of those species are harmless to humans. There are significantly fewer wasp species in Chicago as well, and only a handful of them cause problems in neighborhoods:

The most aggressive species of wasps are the ones that live in colonies, also known as social wasps. Solitary wasps are much more docile and only sting when directly threatened or handled, but they'll sound very aggressive if you get too close.

Did You Get Stung By A Wasp?

Stinging insects are difficult to differentiate between because they're closely related and look incredibly similar, but if you're stung by one, then there's an easy way to tell the difference. When a bee stings a person, their stinger gets stuck in the epidermis and detaches from the abdomen as they fly off, and they later perish from it. Wasps don't die when they sting, though, because they don't lose their stingers. They can also sting multiple times if they're feeling particularly aggressive, so if you don't have a stinger stuck in your skin and multiple stings from a single insect, then the culprit is most likely a wasp.

How To Treat A Wasp Sting

A wasp sting could be as harmless as localized pain and swelling or as life-threatening as anaphylaxis, so you need to know how to treat a wasp sting and what signs to look for if symptoms worsen:

It's always advised to avoid situations where getting stung by wasps is a possibility, but if you have a wasp infestation on your property, avoiding the wrong end of an angry pest isn't easy. This summer, your local Chicago pest control company can help you protect your loved ones from dangerous pests like stinging insects.

How To Keep Wasps From Taking Over Your Property

It's dangerous to live with a wasp nest on your Chicago property, but it's just as hazardous to try to get rid of wasps. Don't put you and your family at risk this year; rely on our pest experts at Aerex Pest Control to take care of stinging insects. We only use high-quality pest control products that are registered by the Environmental Protection Agency, we have over 70 years of pest control experience, and we know how to stop wasps from coming back. Summertime should be enjoyed outdoors, so if you have a stinging insect problem, contact us today about our summer pest services.