Their name doesn’t leave much to the imagination — stink bugs are bugs that stink, but that’s not the end of their story. The most common stink bugs in the United States are brown marmorated stink bugs. This invasive species originated from Asia and first arrived in Pennsylvania in 1996. In just a few short decades, they are already found in much of the continental United States. They get their name from the defensive odor they release when disturbed or crushed. This odor is from a chemical produced in a gland on the stink bug’s abdomen, and it’s thought that it helps protect them from predators. Some species can even spray up to several inches. The smell is often compared to strong herbs and spices like cilantro and coriander. Stink bugs are common home invaders in late summer and early autumn as temperatures begin to fall. 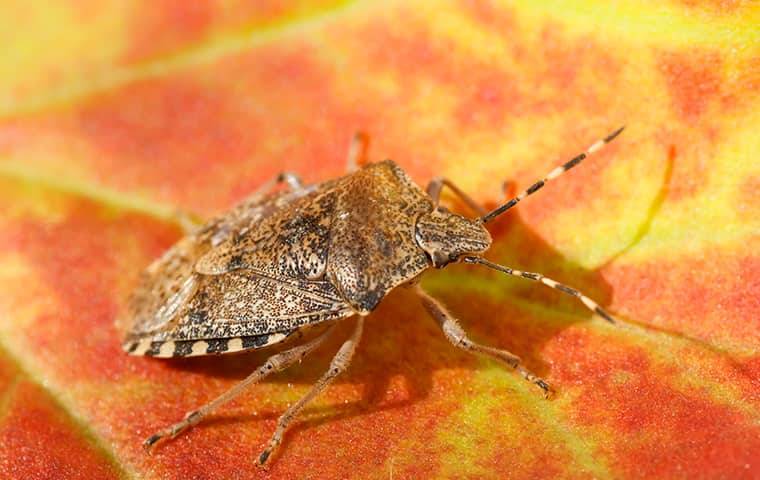 How And Why Stink Bugs Invade Chicago Homes

Stink bugs seek entry into Chicago homes as the weather cools in search of a warm spot to overwinter. (They are less apparent during the winter simply because they have found a warm place to hide.) As spring approaches, they become active again and reemerge, sometimes congregating in large groups on the sunny sides of buildings.

Entry points for area homes are about the same for stink bugs as other pests. Common places they can find ways inside include:

It doesn’t take much space to allow a stink bug access inside. And many times, they don’t need to make it all the way in, preferring to overwinter in the space between interior and exterior walls.

Accidentally introduced to the United States, stink bugs are an invasive species with no natural predators, and their populations have rapidly spread. This is a particular threat to agriculture as these pests destroy crops, but stink bugs can also damage decorative plants, fruit trees, and gardens. In residential settings, they are more of a nuisance than a threat to people since they do not cause property damage or spread disease but can be devastating to farmlands.

While they don’t present health risks, it is worth taking care when handling stink bugs to avoid a residual unpleasant odor on your hands. The smell can linger for hours, so it is best to sweep or vacuum up these pests if they have made it into your home.

Stink bugs also mate and create up to three generations per year, with each family laying between 20 and 30 eggs at a time, so a small population can quickly grow out of control.

Preventing stink bugs involves limiting access as well as minimizing attracting factors. You can do this with the following techniques:

The expert technicians at Aerex Pest Control have more than 70 years of experience solving residential and commercial pest problems in Chicago. Call today to find out more about how we can help you avoid a stink bug infestation.

If, despite your best efforts, stink bugs make it inside your Chicago home, vacuums can be helpful in the removal of both live and dead stink bugs. As long as the bag is discarded to prevent odor from permeating the area, this is an effective way to remove stink bugs without unleashing their unpleasant smell. If a large number of stink bugs are already present, it can be helpful to isolate the affected area of a home by sealing the bugs out. In this case, a licensed pest control professional will likely have the best chances of doing this effectively.